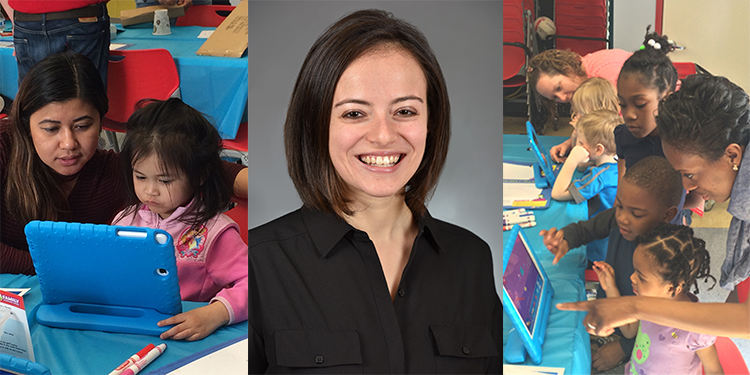 Researcher Lisa B. Hurwitz, center, analyzed data from 45 studies on the impact on literacy of Ready to Learn media, shown in use at a community engagement workshop in Cleveland. Left and right photos courtesy of ideastream.

With Ready To Learn grants from the U.S. Department of Education, CPB and PBS KIDS have worked for the past two decades with a variety of partners to develop, distribute and evaluate educational television and digital media targeted at preschool and early elementary school children and their families. Earlier this year, researcher Lisa B. Hurwitz authored a meta-analysis of the impact that Ready To Learn media has had on literacy that was published the peer-reviewed journal Child Development, the flagship journal of the Society for Research on Child Development. The analysis of 45 studies affirmed and quantified the positive impact of Ready To Learn content on literacy skills.

CPB caught up with Hurwitz recently to learn more about her work:

Q: What made you decide to do research on Ready To Learn?
A: In college, I had a summer internship with WordWorld, which was produced by WTTW and Word World, LLC, and funded by a Ready To Learn grant. Before that summer, I had no idea that the world of educational children’s media existed. I had not known that so many resources were being invested in making educational content for a such a vast audience of kids, or that research informed the finished product and determined if it really worked. I got hooked on this world and decided that I wanted to pursue a career in educational children’s media. Later at Northwestern University, I had the opportunity to research any topic I wanted for my doctoral dissertation, so I returned to Ready To Learn.

Q: What were you trying to do, and how did you do it?
A: My goal for this project was to leverage my position as a relative outsider to critically evaluate whether or not Ready To Learn is really working. In this paper, I focused specifically on literacy because Ready To Learn has historically identified early literacy as an important school readiness component. In addition to asking whether Ready To Learn media was effective, I looked at who the media was most effective for and under what conditions.

Most research studies focus on one media property (e.g., “Super WHY!”) or some finite body of media and are conducted in a limited geographical region with a finite group of kids. A meta-analysis, by contrast, is a research method that gathers every research study about a single topic and analyzes and averages the results to develop robust findings that aren’t constrained by the limitations of any one study. For this meta-analysis, I looked at 45 evaluations of Ready To Learn from its inception in 1994 through late 2016. All of the studies measured at least one literacy skill. About 70 percent of them were commissioned by the CPB-PBS Ready To Learn Initiative and conducted by its research partners, including EDC, SRI, and WestEd. The remainder of the studies were conducted by outside researchers, most of whom were students completing master’s theses or doctoral dissertations.

Q: What did you find?
The good news is that Ready To Learn media works. On average, the media had an effect that translates to about 1.5 months of literacy growth above and beyond what would be expected. To put that in perspective, low-income children enter kindergarten an average of about four months behind their middle-income peers in terms of literacy and language milestones. So, while a 1.5-month boost isn’t enough to close that four-month gap, it’s definitely a step in the right direction.

A 1.5-month boost is similar to the effects typically found in other studies that have looked at the impact of comprehensive early childhood programs on children’s literacy like Head Start or State PreK.

I also found evidence that Ready To Learn media became more effective over time. Whereas the 1.5-month average gain is across all studies from 1994 – 2016, studies from the 2010-2015 grant cycle found literacy gains of a little over two months. But it’s hard to unpack the extent to which the media got better vs. research methodology improved over time.

Q: Did any of the findings surprise you?
I was expecting to find differences across different types of kids, with some kids learning more than others due to family income or other factors, so the biggest surprise for me was that the results were so consistent for kids across the studies — there were no differences in results based on family income, English language learner status, gender, or where the study took pace.

Especially surprising for me was finding that there were no differences based on whether the intervention was focused on television viewing or using interactive (new) media. In cases when teachers or parents augmented TV viewing, such as reading books or doing activities with children to reinforce lessons from the media, the effects tended to be bigger.

Q: What is your conclusion?
A: The results provide evidence that engaging with CPB-PBS Ready To Learn-funded media is a valuable use of children’s and family’s time, especially for preschool-age children, and that committing funds to initiatives such as Ready To Learn is a wise investment of taxpayer dollars.

Hurwitz conducted the research at the Center on Media and Human Development at Northwestern University and published the study while completing a postdoctoral fellowship at the Center on Media and Child Health at Boston Children’s Hospital/Harvard Medical School. She is now a lead researcher at Lexia Learning, a Rosetta Stone Company. For more information on Hurwitz’s research, go to her blog post on the Joan Ganz Cooney Center blog or see the full study in Child Development.